Natura Morta and the History of Oil Paint

Adapted from a 2019 artist’s talk for a solo exhibition

Oil paint was a revolution not just because of how much time it gives to the painter to work before it dries, but because its color is encapsulated in emulsified oil. This introduces a gamut of surface effects that were previously impossible to create. Before the invention of oil paint, tempera was the dominant material for depicting the real world in the West.

Not to knock tempera. Museums are full of sophisticated, layered representations of the world-as-seen painted in egg- or glue-tempera. The Fayum funerary portraits are my favorites. 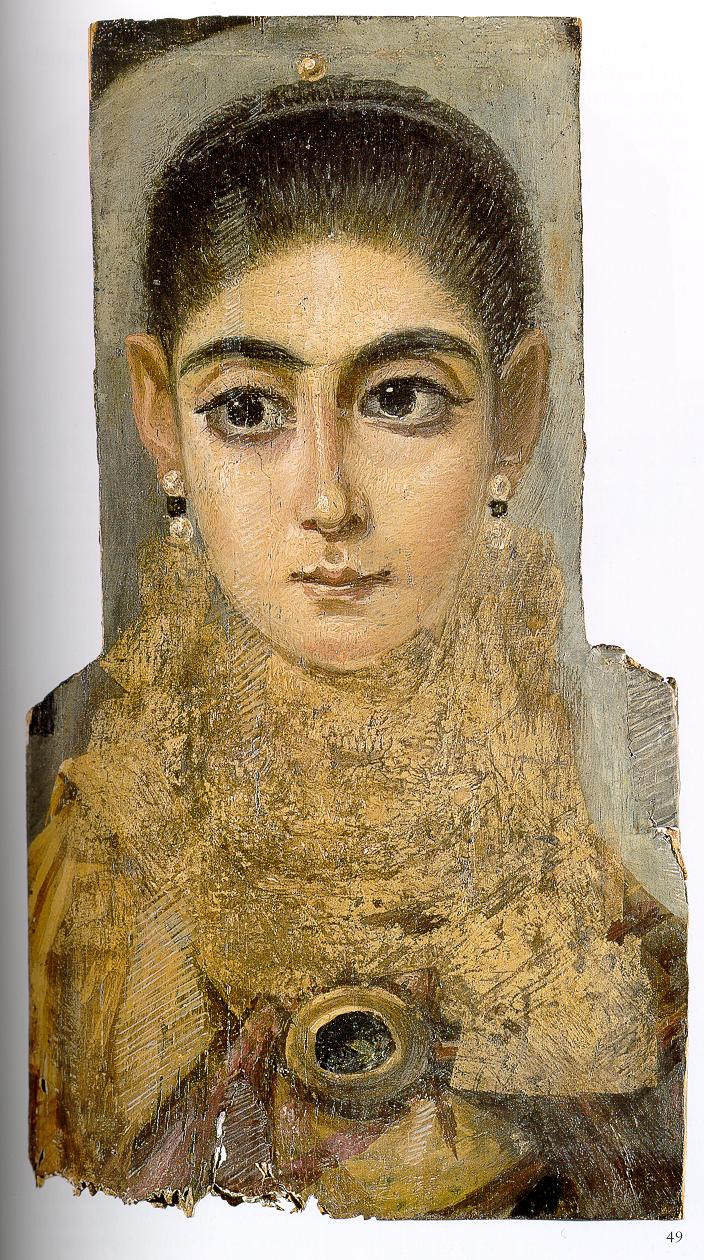 But museums are more full of flat, narrative, graphic depictions, in tempera, of things, events, Important People, and solid ideas. There’s no reason to believe that the literalness of tempera shaped the culture that used it, but it certainly fit the task that it was set to in the West of painting stories.

However, my hunch is that the suspension of pigment in a transparent medium did shape a visual culture. The apprehension of a picture-making tool that interacted with light in more than two dimensions made a difference. In fact, we can see that difference in the Fayum portraits. Some were painted in encaustic — the method of suspending pigment in wax.

Oil painting was a little magic at first. The materials and methods that developed with oil painting overlapped with those of alchemy, and opened up new possibilities in depicting what we see. Gone were the spiky geometric halos of light seen in tempera, replaced by intensely-observed gradients of light, built up over many careful layers of pigment, oil, and often secret materials, suspended in light-catching, emulsified flax oil, as if every grain of color was wrapped in a magnifying lens, or veiled by a membrane between dimensions.

What this meant is that the surface of an oil painting could be more like the surface of a thing in the world. In the sense that it was complex enough to remind us that the idea of surface is an abstract construction, not an absolute thing. When we talk about the finish or the texture of an object, we’re talking about a really incredible accumulation of interactions of light and material. We think of the “surface” of something as the absolute top of it, but where do you draw the line? And how do you see that line? How far does the light penetrate through the absolute top of something before it bounces back, or does the light bounce right off in mostly one direction? How exactly does it careen around the tiny variations on the surface, and does it change while it does so? For example, pink isn’t a color, pink is other colors interfering with each other. So what does it mean that something is pink?

In a sense, oil paint was a technology whose market purpose was to solve the problem of making pictures that looked like the world. This is what people refer to when they say that photography killed painting. Painting had a cushy job of representing reality, photography took that job, and I guess painting starved to death in unemployment?

Ironically, photography happened around the time that people were realizing that the real achievement of oil paint as a technology was to give us a glimpse into how unsolvable the problem of looking at the world was. Most of my work is about the problem of trying to look at the world, and thinking about it too much led me back to where oil painting started.

Oil as a painting medium seems to have developed by the 10^th^ century in or around Afghanistan, but it only saw widespread adoption in the 15^th^ century, which is also when Europe started taking it seriously. Still-lives as a genre developed shortly after, growing up with oil painting as a discipline.

We think of still lives as realistic, clear renderings of something visible. Perhaps the gain is turned up a bit, but, in the end, they seem to be a direct impression of reality onto an image. We only think this because they are full of tricks. “Still life” is a sneaky contradiction. I prefer the Italian term for the genre, Natura Morta. It’s the closest idiom in Italian to the English “still life,” but its literal translation is “dead nature.”

The first trick of still lives was to take a very small slice of the world in place of the whole thing. Calling a collection of food, flowers, and other indicators of status a stilled example of “life” loads them with the temptation to view them as an allegory. That these extremely closely-observed and rendered objects are not phenomena on their own but proxies for something else.

From a painter’s perspective, whether they are an old master or someone today taking a night class, these objects are a space in which to demonstrate the very deliberate form of looking that the genre helped develop within the practice of oil painting. For the viewer, it’s a sort of sporting hunt to follow the tracks of the painter to show that you can be as clever as they were.

Looking at painting as an allegory to be decoded isn’t a kind of looking that we trust as artists much anymore. I think there’s good reason for this, and in most arts districts you can gerrymander a party line between the galleries that hang work that treats interpretation like a sport and the ones that know it’s a quagmire.

One of the reasons to stay away from that kind of work is that it’s mainly a sport for the rich. In this sport, the interpretation of an image in a painting isn’t so much an ongoing encoding and decoding of meaning, but a sort of prize inside the object for sale. It’s a nugget of knowledge that you get to own and put on display, like the objects of desire in a still life. The cliche of explaining what a painting means in low tones in front of it is a performance complicit with the idea that the owner of the object that carries this image acquires special access to this meaning when they buy it, which is used as an explanation for why it’s so expensive.

There are real, socio-economic reasons to resist that sort of relationship of money to vision, but we must not forget that money itself is a proxy. Its involvement is a byproduct, not the end point, of a desire to rationalize, dominate, and control one’s perception of the world — to own a reliable worldview, and shut out any indication that it might be inconsistent.

Looking at these old paintings, I always wondered about the moments of joy that the painter seemed to sneak into these stilted, conservative compositions. Do they love painting Dutch porcelain, or do they love white, and blue, and the things in between? Then there are more blatant moments of resistance, the most famous being The Ambassadors. 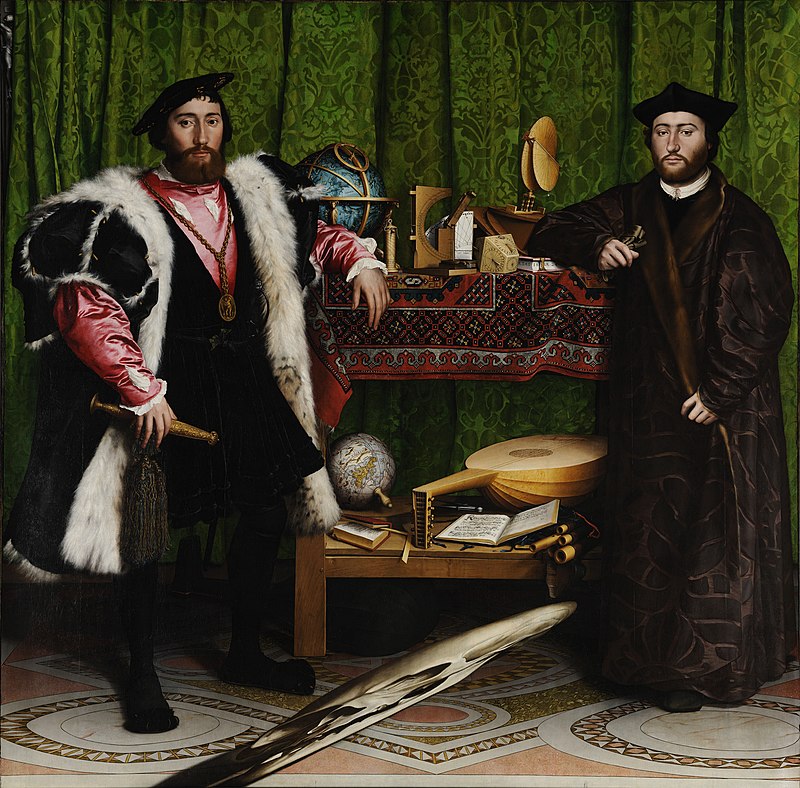 This sort of thing — these breaks with the visual narrative — became a grammar of its own, to the point where any decent still life of a spectacular bouquet of flowers would have tiny human figures hidden among the flowers that viewers could hunt for, or some other kind of hidden thing that plays a minor-chord when you notice it. That kind of game is fun enough, but it’s still one you can win. Find all the hidden things. It’s only interesting if you’re someone who expects things to be as they appear.

The tricky part is that you can start in the same place — the idea that you should look at one thing to see something else — and end up somewhere much more interesting. It is not so much a destination, as a labyrinth that starts with the initial proposition of vision — that what is seen is the same as what is. The labyrinth may not take you anywhere specific, but while you walk it you are in a place where you know more about how you see, where you find usable responses to your doubt in the narrative that is presented to you by vision, and where you can sustain a visual alertness that comes from how, not what, you see. This is where, I think, most of us want to go as artists today, but it’s still hard to get to. New methods, new subjects, new practices are all as likely to trap us halfway there as are the methods and materials of an old master. In fact, over years of asking myself what this thing is that I want out of painting — the act and the product — many signals of the “contemporary” look seemed most misleading of all. Nothing is worse than the near miss. I didn’t want tickets to a performance in the gardens outside the labyrinth, I wanted to go in the fucking labyrinth.

There came a point where I was asking myself, so often, “why, of all things, do you think you should be making paintings” that I got stuck on what a painting is. If you’ve ever looked at the dictionary long enough that the first letter of all the words on a page start to lose meaning, you’ll know what I’m talking about.

Whatever a painting is, I want it to make me practice a particular kind of visual work when I look at it. When I asked “what, of all things, is a painting” and looked back at all these old, dead paintings to answer that question, the way in which they failed to answer it for me was interesting in the way that I want paintings now to be interesting. In the effort of looking at them in the presence of a lost meaning, it wasn’t that lost meaning that I wanted, it was that way of looking.

Attempting to look at this genre of paintings critically creates this interesting tension between the rhythms our eyes are used to following in museums, where we take selfies, and the rhythms they follow in the small galleries where we do our thinking.

There are rhythms in the paths that our eyes follow when we look at these paintings that are so ingrained in how we look at art and objects that we don’t know they’re there.

Down to their bones, how such paintings look and how they were made is accidental, specific, strange, and unlikely. The tricks of the Dutch masters have seeped into the roots of how we see things and how we investigate, despite being shaped by conventions and particular accidents of history. I wanted to pull these legacies of seeing apart, make something that reads as part of this tradition but breaks the illusion enough to peer into its workings.

Painting is still our only art that is always a verb. It has not been nouned like video or sculpture. “Installation” comes close but that’s been adjectized to be “installation art.” A painting is just a frozen slice of the act of painting.

So I see painting as a form of work, and I think the most useful thing a painting can do for a viewer is to create a space where they can tour the patterns of work that the painting embodies. I don’t think it’s entirely allegorical — a painting has to be a real painting to speak honestly about work. But a painting is a record of decisions, made within a self-defining frame, and these decisions concern the first and most important decision we make when we arrive to any situation, which is when we say what something is. It is so ingrained in us to believe our perceptions that it may seem strange to think about seeing as a decision at all. But it is subjective, it is heavily processed, it is unreliable, it is active, it is biased, and we can never quite catch up to it.